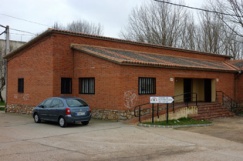 ~Albergue in Granja~
(Courtesy of Google)

I woke up grumpy and late, as per my usual, and got a café con leche at the bar/restaurant across the porch from the alburgue. I asked the woman there how to get back to the trail, and she walked her bike with me to the start of the “new” route toward Orense. This route was listed in my CSJ book as now being waymarked, and was also described as being superior to the “old” route, which was via paved roads.

But in reality, the route wasn’t waymarked at all, and was totally confusing! Here is is where the Camino splits– One way goes north to Astorga to eventually join the Camino Frances (not my way), and one way veers west to Orense (my way).

But, to go to Orense via the “new route,” the book said to first follow the signs toward Astorga, and then to turn left. But figuring out what exactly was meant by left was difficult to parse out, to say the least.

For even though the bike lady had pointed me up the hill, and the extraordinarily old ladies sweeping their porch I’d passed (now two of several who’d asked, “Sola?? Vas solita???” and clucked their tongues finding out I was walking alone) seemed to imply I was going the right way, I arrived at the top of the hill to… a big confusing fork. With no flechas (arrows).

The trail crested the top, and, while the book said “go left”, the trail split off into a hard left, a medium left, and a right, with no arrows whatsoever. I was totally confused. The hard left just felt like the wrong left, despite it being technically what I’d interpret as the real left, so I followed the medium left.

I walked for a while without seeing any flechas (yellow arrows) and began to get nervous. Luckily, I was just walking on a straight dirt road, through the trees, so I wasn’t “lost” per se. I thought about heading back down to the little town of Granja de Moreruela, but I still didn’t like the idea of putting in so much time and distance in the wrong direction, nor did I want to look like an idiot in front of the old ladies (something I really need to get over.)

Anyway, a dude on a big-ass tractor rolls up, and I ask if he knows where the Orense route is. He spoke a heavily inflected, enthusiastic and gruff Spanish I could barely understand. What I gathered was that he thought I was heading the right way, I should hop on, he’d drive a little way down to look for the flechas, and if we didn’t see one, he’d drive me back down to town. I was still high on the excitement of being a Pilgrim, and the generosity and kindness of everyone I’d met, and so without even really thinking, I hauled my ass up into the tractor. [Example of a big-ass tractor, courtesy of Google Images –>;]

So the next thing I know, I’m high up in the cab of this tractor, next to a guy who, as it turns out, smells kinda like beer and is getting progressively more and more excited (and loud) as he talks to me without acknowledging that I can’t really understand ¾ of what he’s saying. From what I could gather, he’d been at a fiesta the night before. And something along the lines of “I had to work, but now you’re here!!!! ¡Fiesta!”

I’m getting a little nervous at this point, because, well, that’s what I do. We don’t see a flecha right away, so I say that I want to go back to town, and he says (I think) to hold on, one is coming on up. The trail is by the river. Tranquila. 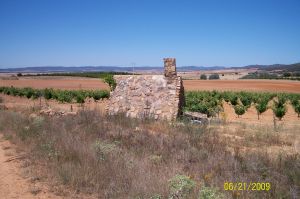 House near where we were driving.

For those of you who don’t know, “Tranquila” essentially means “Chill out” or “Calm down.” (Not surprisingly, this is a phrase I hear repeatedly throughout Spain. It is simply not culturally appropriate in, well, the rest of the world to be as un-tranquila as I am.)

The tractor was rolling along pretty slowly because, you know, it’s a tractor (and that’s what they do.) And, it did seem like we were heading the right way. Still, I’m American, and I’ve seen way too many crime dramas and New York Post articles an anxiety-prone chica should be allowed.

So I’m vascilating between thinking this guy is a nefarious alcoholic creep with his constant prattling (“Fiesta! Tranquila! Mi Corazon es bueno! Fiesta! Jejejeje!”) and simply kind of a dumb guy who had something interesting happen to him that day (giving a Pilgrim a lift.)

All you can see for miles!

As we then slowly veer off the dirt road toward the main road, there is a car blocking our way. They seem to be moving gas cans around or something, and the Tractor Dude says something like, “Do you want to go in the car?”

And I’m like, “With 3 guys!? And leering Spanish guys, at that? Oh Hells, NO! I’ll stay up here, thankyouverymuch.” (OK, it was more like, “No, I prefer with you.”) I asked if he knows them, and eventually it sounds like he says something like, “Don’t worry, they’re family.”

Anxiety now officially has the upper hand. The guys get back in the car, and we follow them slowly down the road. Tractor Dude continues laughing and rambling. He assures me that the trail is coming up, and, true enough, as we cross the bridge over the river, I see an arrow and the trail off to the side.

“¿Porque no parada?” I ask (which means something along the lines of “Why no stop?”) and Tractor Dude tells me that the tractor is too wide to stop on the bridge. This makes sense. But shortly thereafter, we are past the bridge, the road seems plenty wide enough to me, and… we still don’t stop. He seems to be telling me to wait, wait, a little farther, a little farther. Tranquila. But we were plenty far enough past the trail for me.

At this point, I realize I’m stuck in a tractor with a possibly half-drunk farmer and following a carload of 3 men. Scenes from Law & Order begin flashing into my mind and I blurt out in my broken Spanish, “¡Quiero Bajar! Bajo! Baja! Bajan! Bajamos! Parada! Pares!” (“I want to get down! I get down! You get down! They get down! We get down! Stopping! You stop!”)

Eventually, I switch to English, mixed in with Spanish, until I’m in a full on panicked scream, my voice pitch rising with every breath. “Stop! Stop! I’m SCARED! I’M SCARED! I‘M SCARED! ¡TENGO MIEDO! ¡¡¡TENGO MIEDO!!!!”

I’m wild-eyed and reaching for the door. I can’t figure out how to open it – it’s some secure, confusing lever-type latch, and, remember, I’m probably 10 feet off the ground in this cab. Tractor dude looks at me like I’m completely insane (the term “banshee” comes to mind), slows the vehicle down, calmly opens his door, and I guess rushes to the other side and actually helps me down.

He looks kind of baffled and actually kind of hurt, and, as I get down, he makes the “not me” hands off kind of gesture. I growl at him, “¿Corazon bueno?? ¿Es verdad??” (“Is it true you have a good heart?”) and literally run off – with my stuff jangling – while all at the same time thinking how ridi culous I was being.

I mean, why run? He, plus any of the 3 gentlemen in the vehicle in front of him, could’ve caught me, especially with me running WITH MY STUFF. (I just couldn’t let it go!) And, was my imagination and American-indoctrinated “Everyone wants to hurt you” ideology just running wild? But, it didn’t matter: I was simply panicked. I’m not sure I’ve ever felt such corporal, instinctual panic before, but if I ever had a doubt, well, this was the real deal. Rational me was watching from above, baffled, as well, as I ran into the trail, stashed my stuff in the woods, and just ran and ran and eventually tried to hide myself behind a rock and some trees.

I’d heard them drive away, but I was a little afraid they’d come back. I checked to see if I had a signal on my cellphone to call Hugo or the Spanish version of 911 – but no luck. I paused and looked around. It was the first really, truly pretty place I’d come to, but I had a hard time enjoying it at that moment. I finally went back for my stuff, and headed back to the trail.

I then realized I must’ve left the phone where I’d sat down the first time. I stashed my pack yet again, and headed back the other way – again – to look for the phone, but got scared – again – and decided to screw it. I aborted the mission, re-found my stuff – again — and headed back (again!) in the correct direction.

I turned around and looked at just how tranquil and beautiful the scenery really was. The bridge we had driven over was in the distance. I replayed what had happened as the shaking began to subside. I still don’t know if I totally misread this person and my overblown sense of doom caused me to make a ridiculous scene worthy of an Oscar, or if my acute sensitivity protected me from something horrible.

Most I’ve spoken to lean toward the former. I didn’t know what to think at the time. But I took in the tranquility of the now-still environment, looked down at the gorgeous river, put “Your Heart is An Empty Room” on my ipod and, giving thanks for being OK, finally cried.