Sadly, all I have written in my journal about the fascinating journey that changed the course of my entire Camino, and, to some degree, my life, is the jotted notes from the previous post and the line, “Finish transport story first.”

From Barcelona, I’d decided to check part of the Camino de Santiago on this part of the country, called the Via Aragones, the Aragon Route, following the Aragon River.  Getting from Barcelona to the route’s head in Jaca took forever.  The bus ride was long, and confusing. I don’t remember who I was sitting next to, or how long the ride was, but I do recall when a young-looking woman, probably about my age, got on the bus. She had dyed black hair, unique black clothing with a smattering of red, an eyebrow and lip piercing and what seemed like a scowl held in an affected goth style.

“Please don’t let her sit next to me,” I’d thought, a bit put-off by her intensity.

At some point, the bus broke down. It was pitch dark out. I had no clue what was going on.

I called the pilgrim hostel, realizing I may not get there in time for the curfew– all pilgrim hostel doors close at a certain time. The hospitelera — person who runs the pilgrim refuge — did not seem to care about my (to me) dire situation, instead telling me to just go to the hotel in town, tell them I was a pellegrina, and they would hopefully have rooms and offer me a pilgrim’s discount. Of course, as is my natural inclination, I was in a near panic, disturbed by the change in plan and the unpredictability and sure that I’d be sleeping on the streets of a strange city.

The bus was hopelessly broken, and we all ambled off the bus with our things to wait for another bus to bring us the last several kilometers to Jacá. As we were waiting, a woman near me said, “I think there’s another pellegrina on the bus, you can probably share the cost of the hotel room with her.” And gestured toward one of the people in the small crowd of passengers.

And, of course, who was that fellow pellegrina? The woman in black I was so put-off by. The woman I had judged as sullen and grumpy and whose energy I wanted no part of.

The woman who would soon become my roommate, my walking companion, and, slightly less soon after that, my best friend. 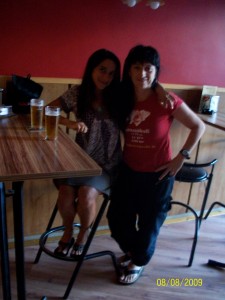 Dina & Marie,
about 1 month after we first met